How Not to Fight Over Money

This morning I had a sharp (read: nasty) reaction about a financial matter shortly before WonderMan left for work. Even with 11 years of progress learning to work as a team in financial matters under our belt, we are still susceptible to intense emotions when ugly surprises arise. The reaction took me back to our first money fight over joint or separate accounts. Oh they joys of newlywedom. I’ll save that story for a future post!

Thankfully, the immediate separation allowed for cooler heads to prevail. While we still have a financial issue to address this evening; claws, venom, and vitriol aside – we’re on the same team. Money fights account for a significant number of marital breakdowns. Some reports put the number of close to 80%. That’s huge! It’s also a key reason why couples should work very hard at finding a solution to any ripples in the financial framework as soon as they appear.

I want to share a few concepts that I’ve learned (sometimes kicking and screaming) to help you avoid some of the headaches involved in learning to work with another person and your money. 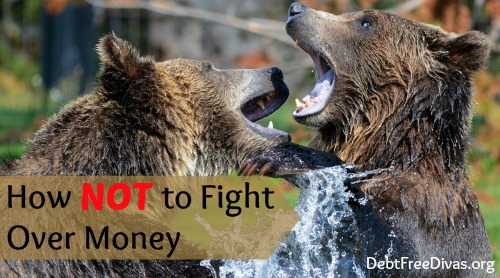 Your spouse was a fully functional adult (in most cases) before you said, “I do!”

You may disagree…vehemently…about an approach, process, or philosophy. 90% of America may agree with you. However, you don’t have to work with everyone else, just your spouse. My mother would say often, “respect begets respect”.  Without this key element, authentic forward progress is going to be challenging. You may brow beat someone into verbal submission during an argument, but grown folks will do what they want when they want.

WonderMan is often a man of few words. He made it clear early on, respect was a nonnegotiable. We’ve been much better since that line in the sand.

Be the Change You Want To See

This is a great line often attributed to Mahmta Ghandi. It’s a line in one of my fav songs from India Arie, “Better People”. Incidentally, it’s also my #2 top tip for merging financial philosophies in marriage.

Often, one half of the duo sees the light initially and hopes to ditch bad behaviors with money. It took years…yes years…for WonderMan to stop fighting the idea that debt freedom was a preferable path for our family’s future. After all, he’d been in deep debt for years and always paid his bills on time. What’s the problem? A question I had to wrestle with often. Until we experienced some major hiccups in our income stream, I really had no great answer.

So I started where I could. Doing a budget each month. Committing to posting the budget and making cuts in my personal expenditures. I kept up the process in areas that didn’t directly or “negatively” impact WonderMan. For example, I suspended trips to the nail salon, enjoyed more shopping in my closet, and stopped suggesting movie outings. I bought groceries regularly so that cooking home meals and brown bagging lunch was more convenient. Finally, I shared my excitement over small gains.

Sometimes when we make a decision to get out of debt, we want to restrict our spouse’s activities while making concessions about our excesses or poor habits. At this point, I’ll remind you to review point #1.

WonderMan eventually joined me – with his own brand of belt tightening – and we began to work together. Let me say again, this was an outcome that materialized after sustained effort on my part. I’d like to think that he was convinced after seeing my commitment to the process. I’m sure, he’d never admit it. Which brings me to top tip #3.

Every fight is not worth it. The obvious question – well, what issues do I fight? If there are no life threatening, permanently irreversible consequences at hand, consider relenting. Two reasons:

1.       I’ve learned that life is a much better teacher than you and your theories or hypotheticals could ever be. A man [or woman] convinced against his will is of the same opinion still.

Sometimes, plainly I was right. We’ve taken serious detours that could have been avoided if only my approach was followed. However, the lessons in failure speak louder than any shrieking I could ever attempt. The bonus, there is much more harmony in digging out together rather than fighting each other on what may or may not happen. Plus, if you participate in a failed approach, you’ll never have to have the argument again. Ever!

Also, sometimes I was wrong. Instead of fighting about what might be, give in and let life teach you both a tangible lesson that won’t soon be forgotten.

There is no secret formula for happiness. Each couple is different, but these are some general concepts that can be applied in a variety of situations.

Couples should remember that you are on the same team. This is not a competition to determine who is more right. This journey is filled with successes and disagreements that if not managed properly can make the process of dumping debt miserable. Be patient with yourself and your better half so you all can finish the journey together.

Please share any additional tips you have for working in harmony with money.

Before you go, get your FREE copy of our tips to save more money.

Retire Who? When? Me?Can We Be Financially Free?