How Does Student Debt Affect Your Chances of Homeownership?

Knowledge is power for recent graduates with student debt. One common belief is that student debt prevents you from saving for a down payment or ruins your credit score to the extent that you can’t qualify for a home loan. While these factors can impact your ability to purchase a home, student debt doesn’t deserve all the blame for low homeownership rates among recent graduates. 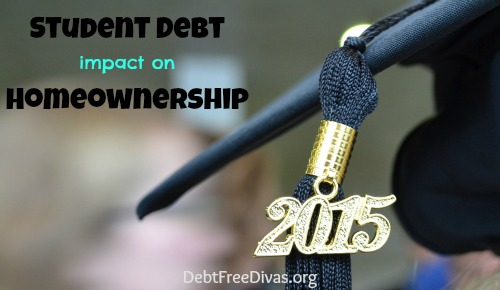 New data shows student debt has a minor effect on your probability of owning a home—as long as you graduate with at least a four-year degree. Graduates with a bachelor’s degree and no student loans have a 70 percent probability of homeownership. If you get that same degree but also have $50,000 of accompanying loans, your likelihood of owning a home drops by a mere 4 percent. It may take graduates with undergraduate debt longer to save a down payment than their counterparts with no debt, but student loans have a negligible impact on their likelihood of homeownership.

The effect of student loans remains minor even at the graduate school level. A higher level of education actually insulates borrowers from the negative effects of their student loans when they buy. Individuals with a medical, law, or doctoral degree have the highest likelihood of owning their homes, despite the student loan debt they accrued earning advanced degrees. 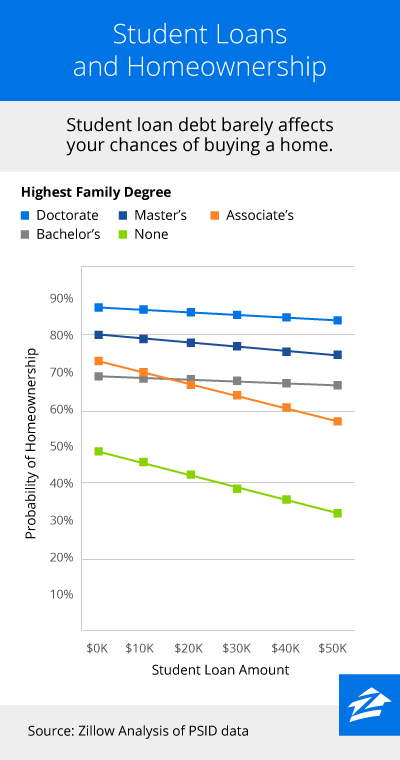 Student debt among married couples also follows the same trend. For example, if at least one spouse has a master’s degree and they have no student debt, their likelihood of owning their home is 80 percent. If that same couple has $50,000 of student debt, their probability of homeownership only drops by 5 percent. Student loans do not substantially decrease the odds of homeownership among married couples, as long as one of them completed their degree.

Sensitivity to loans increases for graduates with only an associate’s degree or an incomplete degree. With an associate’s degree, your probability of homeownership is 73 percent if you have no loans and drops to 57 percent if you have $50,000 of loans. For individuals with no degree and no loans, the probability of homeownership is 48 percent. Add $50,000 of loans to the mix but still no diploma and that likelihood falls to a measly 33 percent. Obtaining a diploma is critical if you want to own a home despite your student loan debt.

Understanding how student debt factors into your home purchase is essential to establishing a shopping budget, regardless of your education level and loan amount. Beyond this myth-crushing data, you have other factors to consider before you plan a home purchase, but you shouldn’t shy away from exploring the option. Plug the numbers into a calculator and evaluate whether you should be shopping for homes, continuing to bulk up your down payment or working on eliminating more debt.

What Stories Does Your Credit History Tell?How to Save Long-Term by Prepaying Your Mortgage