If you’re not up on Sesame Street’s music production, you’re missing out. Grant it, with toddlers running around my ankles – Sesame Street and other children’s programming have become a part of my regular routine. Enjoyed throughout my childhood, Sesame Street really keeps up with the trends while keeping the focus purely on educational development. That said, we groove out to the music videos almost every day.

I’ve actually created a Youtube playlist that is crucial for hair braiding time (that and a steamy bowl of oatmeal. Don’t ask – it just works). The two-year old and I rock out to a 30 minute set and all is well by the end. The music videos are well produced, catchy, and have the best messages. Being out of the mainstream loop, I didn’t realize the songs were remakes of popular productions – none of which I’ve even seen to date. A song with Bruno Mars and a delightful cast of puppets has me thinking about those who need encouragement on the debt free journey. 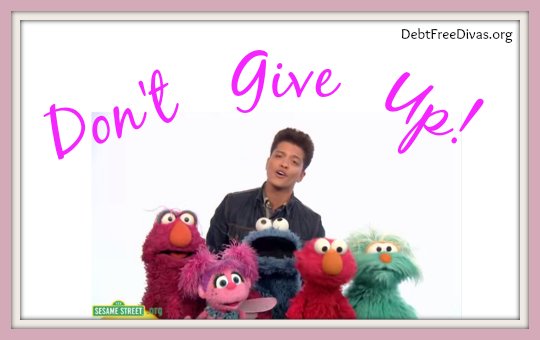 “When you want to do,

And it feels really,

Really hard to do.

You feel you’re through.

Well, I have some advice for you.

This soulful crooner and his band of peppy puppets were encouraging kids to try their best in areas like catching a ball, roller skating, or other youthful activities. We, as adults, can take them for granted because they are now second nature. The same applies to budgeting, savings, and dumping debt. Those childhood activities only became second nature because we practiced and improved and refused to quit. I haven’t skated in a while, but I’m sure I could lace up a pair and get in the rink if needed.

Maybe your budget fell short or you overspent at the grocery store…AGAIN. UGH! Becoming proficient in these areas requires practice. We learn from failures. Make the adjustment and try, try again. Maybe you’re just getting started and you’re looking at a massive mountain of debt and financial missteps to correct and overcome. Don’t give up. Like Bruno told the kids, “Keep on moving, you’re going to get there. Just keep on moving. Don’t give up!”

This post has been in the works for some time. I saw a tweet today that referenced her mission to dump debt as seeming nearly impossible. I told her the same thing: “You will get there, this I swear. Don’t give up.” (Can you tell I absolutely love this song!) Sometimes we draw motivation from those who’ve accomplished similar goals. These two interviews should be motivation for anyone struggling to see the light in a sometimes dark tunnel or debt dumping.

Well, you must check out the video for yourself. When you’re tempted to get down, feel discouraged, or even throw in the towel; let this soundtrack play on a loop in your head. Or better yet, just push play below. Enjoy!

Do you have any motivational songs that help you stay focused? Share them with us below!