Back From Jet Lag – Hawaii For Less

I’ve been on an unintended hiatus including and following a family trip to Hawaii. We attended a wedding in and explored the island of Oahu, one of 8 major islands in the Hawaiian chain. As much as I can surmise, the individual islands are synonymous with counties or parishes within the state of Hawaii. Just like New York, there’s also an island named Hawaii (a.k.a The Big Island). You can potentially live in Hawaii, Hawaii. A paradise so nice they named it twice! The capital is Honolulu – one of the larger cities on Oahu and our final flight destination. Waikiki is the other Oahu party spot; about 45 minutes away. When programming your GPS, you’ll likely include the city, island, and state to locate your target.

Initially, I was apprehensive about the extremely long flight with very small children. My apologies – still – for the poor saps assigned to the seat preceding my two year old (it wasn’t pretty). The entire trip, including layovers and delays, took 12 hours from Chicago. Brutal. Considering the damage, the 8 month and 2 year old were travel troopers. All travel troubles were worth the Hawaiian experience. Numerous times throughout the week I reassessed the decision to put down roots in Chicago. Again, why??? The island is beautiful. Even the inner city areas (the hood) possesed an inviting charm. I’ve been called cousin by more strangers than I care to count. Who knew? 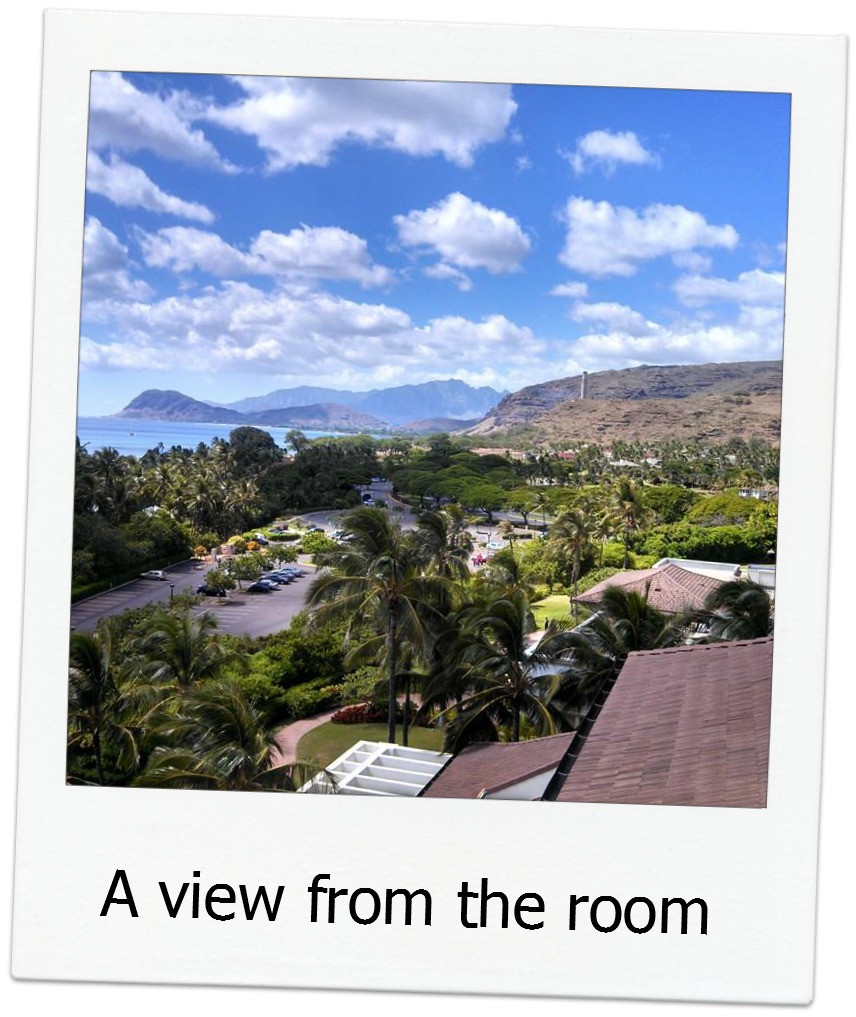 Every one flashes this Hawaiian hand sign in pictures. It means hang loose or take it easy. Check out my aunts’ cheesy grins as they pose with members of the Polynesian dance troop who performed at my first authentic luau. 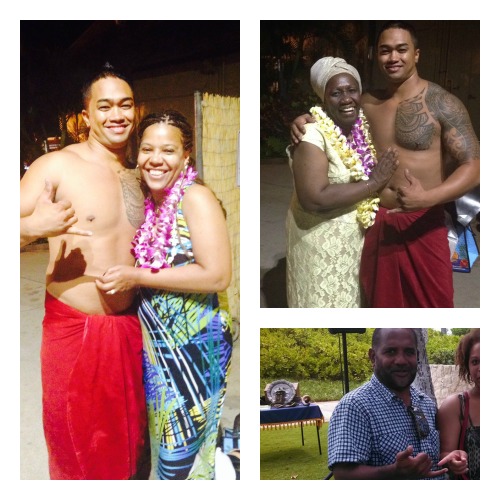 Hawaiian is actually a race. So people are not just from Hawaii, they are! We also pronounce the word very differently. Hawai’i (as written there) ends with a very quick ‘e’ (very quick) and a few notes higher than the beginning. Clench your stomach muscles and sit up straighter on the last ‘e’, and you can approximate the native pronunciation. The Hawaiian street names were another adventure. They gave the GPS a migraine. It was funny, except when you’re the driver.

Trying to match street signs with the GPS pronunciation led to more than a few U-turns.

This walk down the recent memory lane is great, but I also wanted to share some ideas on how to do Hawaii for less. The island state is one of the most expensive vacation destinations in this country – or a few others for that matter. Because of the expense and distance, Hawaii has never been on my to-go list. I can see how people are hooked though. White sandy beaches, gentle warm waves, and rolling hills are just a few of the natural wonders available for no extra charge. Let’s keep it real – it costs a pretty penny to take a family of four to this island paradise. So here are a few ways we cut the cost to make this family fun trip happen:

1.      Be willing to bow out. I had a budget to spend and if I couldn’t meet that figure, we would have to send a card – post wedding. This actually worked to my benefit, because I waited to purchase airline tickets until 30 days out which brought our tickets down by $80/person. This has happened before – buying airline tickets for a flight more than 30 days away secures your seat, but generally costs significantly more. If you can wait and price check, do it.

2.      Do your own research. The wedding party travel agents quoted a price I just couldn’t stomach. The initial price for 3 fare paying air travelers was in the $6K range for one week. By working my own deals, we paid around $3K for travel and lodging. We stayed a 5 minute walk from the wedding hotel and paid as much for a week in a 3 bedroom/3 bath condo (with washer and dryer) as we would have for 4 days at the hotel. I’ve also grown fond of vacation condos vs hotel rooms. The cost can be spread over multiple groups, you have much more room, and a full kitchen affords you an alternative to restaurant food. I found the available week on Craig’s List and confirmed it on sites like Home Away, Vacation Rental by Owner, and Trip Adviser. I also confirmed the ownership with the property management (no long distance rates using my cell phone). While I spent many many many hours doing research and negotiating with various owners to get the best deal, we had a grand time. So, it was worth the extra effort.

3.      Buy two tickets. This doesn’t always work, but compare the cost of buying two tickets if you live in the East or Midwest. Those with flyer miles can check the prices on a flight to the west coast or Phoenix combined with a round trip from the coast to Hawaii. You may be able to save enough to beat one full fare and compensate for the extra hassle of rechecking bags midway. One must also consider applicable baggage fees to make this strategy work. We flew on one full fare. The savings wasn’t worth the effort.

4.      Avoid resort restaurants. Again, another benefit of vacation condos over hotels is food. A Hawaiian fish burger – with no sides or drink – was $19. My husband joined the family for a group night out. I had frozen pizza with the kids and an early night in. We even ventured into Honolulu and the prices – while still higher – were not ridiculous. My relatives at the Marriott were treated to a $20 breakfast every morning. I packed dry foods from home (rice, oatmeal, popcorn, snacks,baby food, etc) to avoid paying higher grocery prices on staples. This was especially helpful because we had something right away after a half-day of flying.

5.      Play for nothing. We split our time between the beach, the pool at our “hotel” and the Marriott hotel. The children in the family were more than occupied with enough “included” activities to keep them busy and worn out at night. 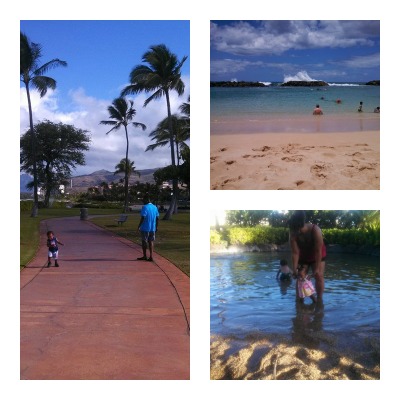 We also visited the Pearl Harbor Memorial – tickets are free. Just arrive early enough to snag one of the 2000 made available daily. Three of us arrived at 8:30 am and had no issues securing enough tickets for the large group. Everyone from my 70+ year old aunt to my 2 year old enjoyed and appreciated the memorial tour and museum. 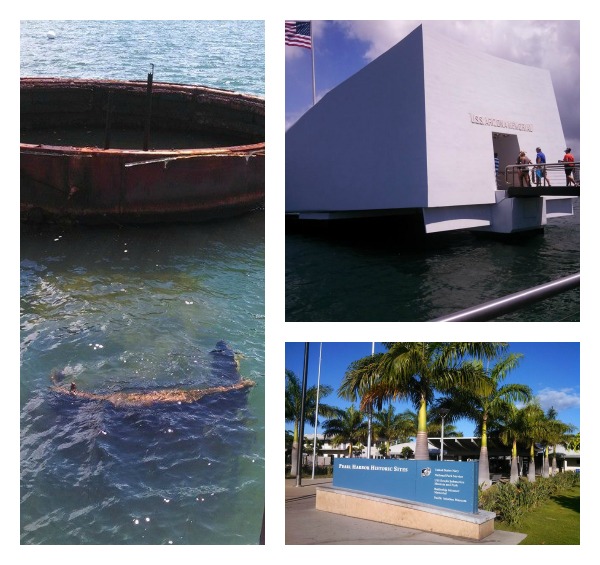 A floating memorial was erected above the submerged Arizona battleship, one of 3 never recovered after the attack at Pearl Harbor. Portions of the ship can be seen above water. An interesting movie and ferry ride comprise the memorial tour. 900 soldiers are entombed on the sunken battleship. 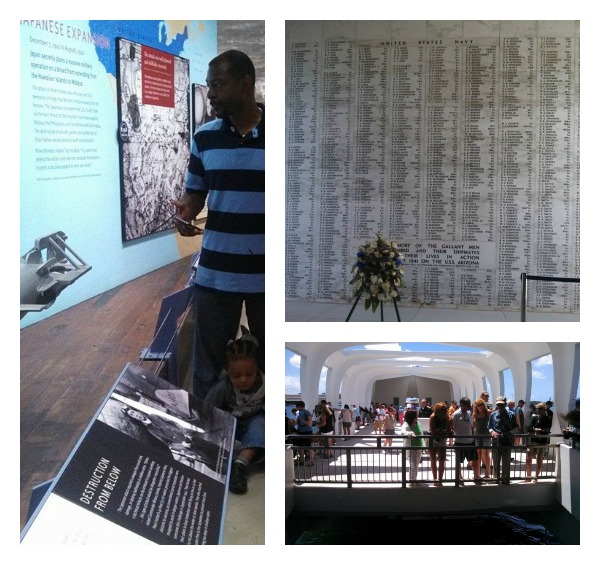 6.      Worship with the locals. I’m training to run a 5K in September and agreed to maintain my regimen while in paradise. Running along the ocean is cathartic. I ran past an outdoor church on the resort property. How cool was it to worship the Lord while appreciating this beautiful creation! Yes, it did rain. My hair was a mess. After prayer, the sun came out and we dried – almost completely. 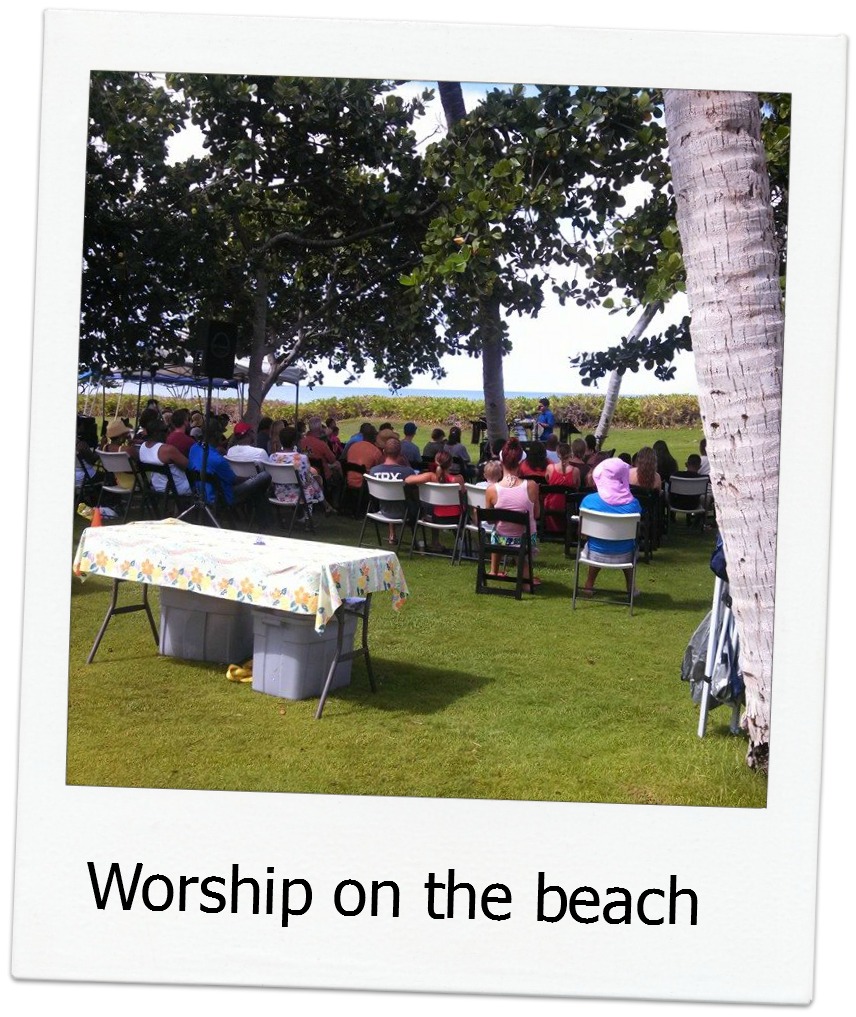 Traveling to Hawaii was a long trip – for us- and required a lot of work to make it happen. I appreciated the mini-family reunion and the experience that was uniquely Hawaiian. Aloha! 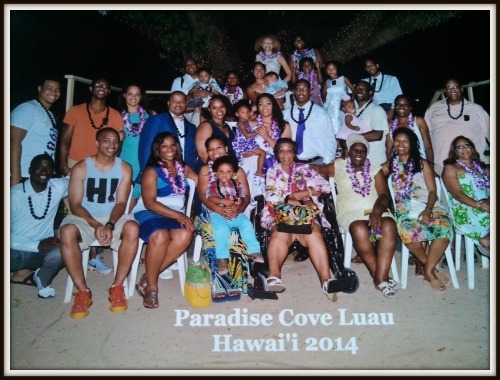 Now that the jet lag is behind me – it’s back to Debt Free Divas with a passion!